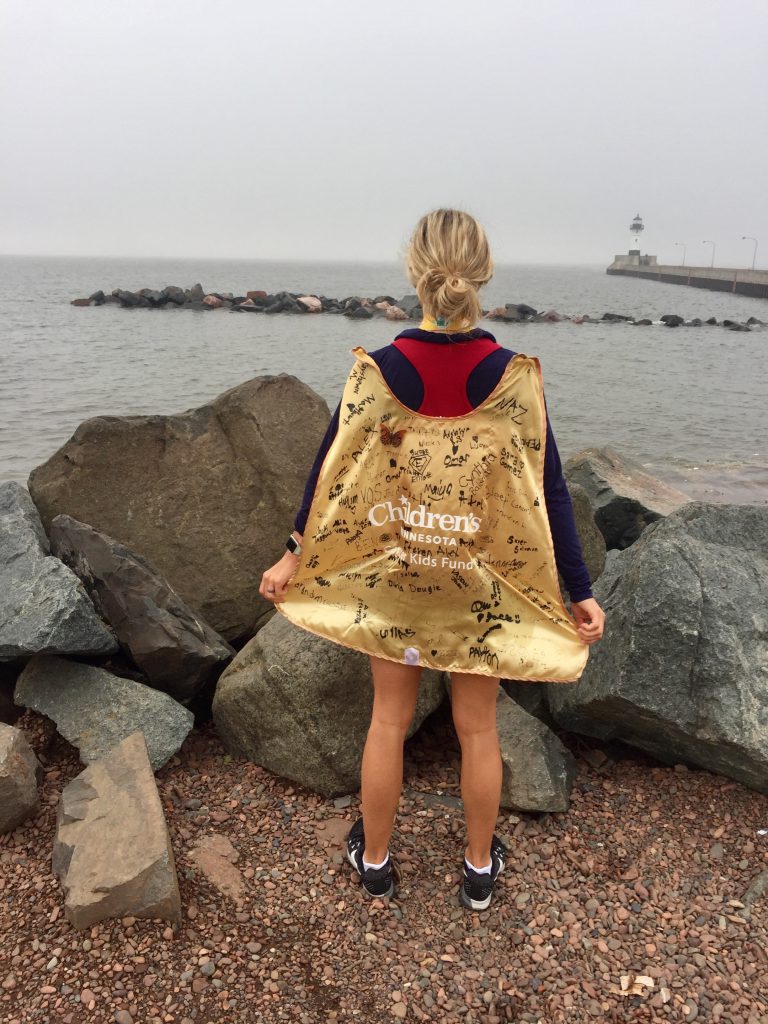 Angie Andresen had a goal. To finish the Garry Bjorklund Half Marathon in under 2 hours. An average pace of 9 minutes and 10 seconds, per mile.

In distance running, as it often happens, she hit a wall. The point in a race when an athlete feels like she’s running out of steam. Angie’s goal seemed less and less attainable as the miles felt harder and harder.

She needed a boost – and found a beacon. Just ahead, she spotted a runner wearing a gold cape. Written on it were names, messages and signs from kids. Signs that Angie needed to keep moving.

Children’s has since had a special place in Angie’s heart, so the gold Children’s cape caught her eye.

Another special symbol for Angie and her family is the monarch butterfly, which – whenever they see one – is a reminder of Alex’s short time here on earth.

On that gold cape, worn by Children’s hematology and oncology nurse, Erin Bevers, was a monarch butterfly pin, and written next to the pin was the name Alex.

It was just the sign – and boost – Angie needed to keep moving in the direction of her goal. She crossed the finish line in 1 hour and 58 minutes – in part, thanks to Erin and her cape, which gave Angie the wings to fly.

Grandma’s Marathon registration opens on Tuesday, Oct. 1. Commit to run and fundraise for Children’s like Erin by joining Team Superstars today! Have questions? Contact Brady Gervais at [email protected] or 952-992-5512.