Operating on a 2,300 pound rhinoceros isn’t part of Dr. Siva Chinnadurai’s typical day as a pediatric ear, nose and throat (ENT) surgeon at Children’s Minnesota. Usually, Dr. Chinnadurai’s patients are much, much smaller. However, his knowledge and skill as an otolaryngologist made him a valuable member of the team at Brookfield Zoo in Chicago treating Layla, an endangered, 8-year-old black rhinoceros.

In December 2017, zoo staff noticed that Layla was having difficulty breathing. They diagnosed her with an infection and blockage in her nasal passageway. In April, as part of her treatment, she underwent the first ever CT scan of a live rhinoceros.   The scan revealed the extent of obstructive tissue blocking her nasal passages. This is particularly dangerous for rhinos because they cannot breathe through their mouths for very long.

“This was a unique opportunity to apply my Otolaryngology training in ways I wouldn’t have imagined.  I’m very glad the procedure was successful, and grateful to have been part of Layla’s team,” said Dr. Chinnadurai.  Layla continues to do well months after the procedure. 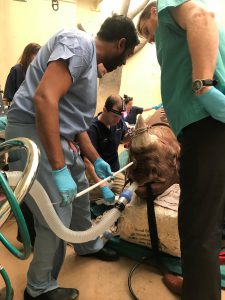