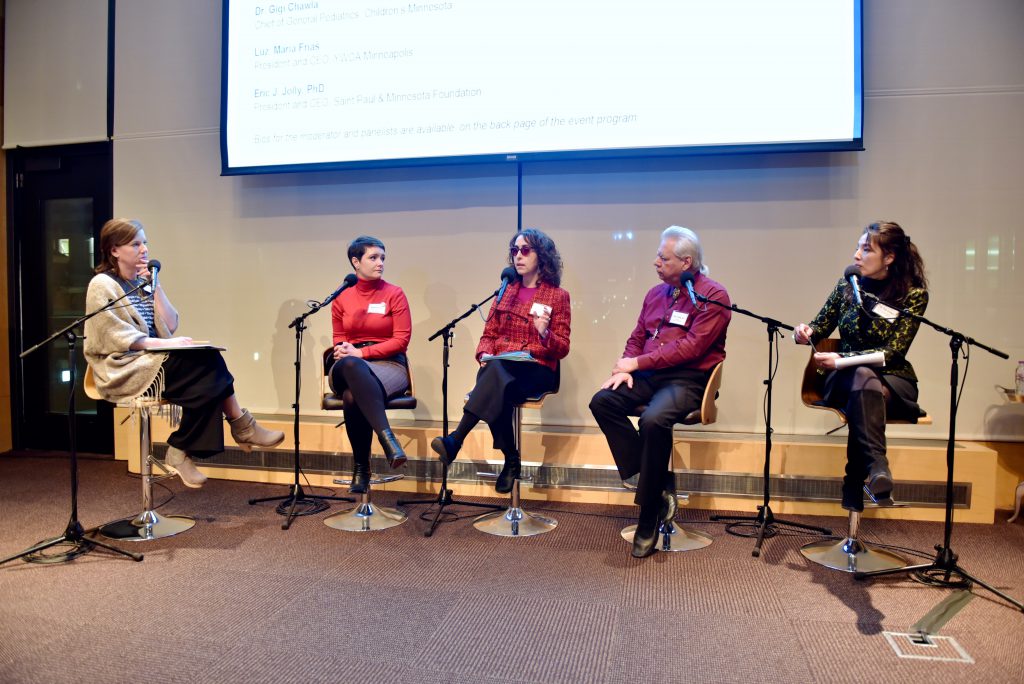 On one of the coldest nights in Minnesota’s history, more than 100 people gathered at The Minnesota Public Radio (MPR) UBS Forum to watch the new documentary No Small Matter. Hosted by Children’s Minnesota, HealthPartners and MPR, guests gathered to explore the most overlooked, underestimated and powerful force for good in America today: early childhood development and education.

“As every family’s essential partner in raising healthier children, we recognize that the care for these children goes way beyond medical care,” said Dr. Gorelick. “Only 20 percent of a child’s health is influenced by health care, as environmental and social factors play a large role in their development.”

The documentary captures a variety of perspectives on early childhood development including those from parents of young children as they struggle day-to-day with child care issues, retired military leaders who have concerns about the preparedness of our next generation to serve and be good citizens, and psychology experts who study the brain architecture of our infants and toddlers and see the opportunity for potential.

Eighty percent of brain development occurs by age three, meaning that the first few years of a child’s life are essential to healthy adulthood. Giannini spoke extensively about the need for investment in the care for these kids, highlighting that research shows for every $1 invested in our children, the return averages approximately $11. But, “it can be hard to convince someone that even $1 is worth it if they need to wait 18+ years to see that return,” Giannini told the audience.

Dr. Jolly also spoke about the need for funding, emphasizing that voters in the state of Minnesota fully support making high quality child care accessible and affordable. The extreme cost of care, as explored in the film, is a major barrier for early childhood development across the country. In 33 states, childcare for infants costs more than tuition at a public college, meaning it’s unrealistic for most families to pay for the support, no matter how much they might need or want it.

Frias emphasized the need to understand the touch points we have with young children and their families and better develop strategies to capitalize on those moments so that families know what resources are available. Dr. Chawla expanded on that point and talked about the need for pediatricians to step up and ask questions beyond the basic health care of a child. “It takes a lot to lean in and talk to families about the importance of engagement and developing on track, but those little moments of interactions between parents or caregivers and their child are the things that kids need to blossom and grow.”

Dr. Nathan Chomilo, pediatrician at HealthPartners and medical director of Reach Out and Read, wrapped up the evening by encouraging attendees to act on the information shared in the documentary and panel discussion.

As the night came to a close, Giannini summed up the documentary and subsequent discussion with a strong, single reminder. “Children are 20 percent of our population but 100 percent of our future.”

Special thanks to ChildCare Aware, Little Moments Count, Minnesota Children’s Museum, MNAEYC and MNSACA, Reach Out and Read, and Start Early for their support of this event.

Check out Dr. Gigi Chawla and Rachel Giannini on WCCO’s Mid-Morning Show. To learn more about early childhood development, check out the advocacy section of the website. To find a No Small Matter screening near you, visit the film’s website to see dates and times of upcoming events.