Resilience in the face of sudden trauma

Westen was coming back from his hockey game with his mom Danielle and older sister Cierra when a drunk driver crashed into them in February 2018. Neither Westen nor Danielle remember the details of the crash, but the aftermath is hard to forget. 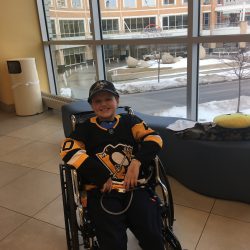 Westen, who was 8 years old at the time, suffered severe trauma to his internal organs, a fracture to his back and his lungs had collapsed from internal swelling. He was transferred to the Children’s Minnesota trauma center where they had to open his abdomen to remove nearly 2 inches of his intestine, repair torn muscle and tissue, and place a colostomy. A lot of skin was damaged and had to be removed.  When his breathing tube was replaced with a trach, he was slowly taken off of sedation and started to wake up. He couldn’t talk, walk or get out of bed due to his injuries.

“He had to slowly relearn all these basic skills again,” Danielle said. 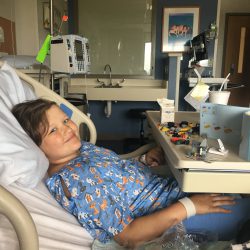 Luckily, Westen’s resilience shined through and he was able to get out of bed for the first time in April and got discharged from the hospital two months after the accident. For five months Westen returned to the hospital twice a week for physical therapy and various procedures, including repair of an orbital fracture and extensive surgeries to close his abdomen, which was finally closed six months after the accident. A year and nearly 15 surgeries later, he’s doing extremely well.

“He’s doing amazing. He should still be in a wheelchair, but he’s running around. You would never know he has been through so much when you see him,” his mom said with pride.

Danielle credits his fast recovery and attitude to the environment at Children’s Minnesota.

“He loved going there – he knows half the people. He thinks of them as friends, like family. He is excited every time he has to go to Children’s. All the nurses and everyone were so supportive. There are tons of children, tons of patients but they’re not rushed and they’re personally invested in each patient there, which is huge.” 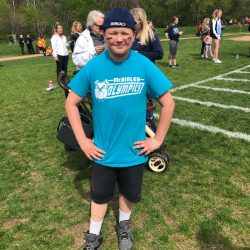 From witnessing the experience, his sister Cierra says she wants to grow up to be a nurse at Children’s Minnesota and help kids like Westen.

Westen is back to being a regular kid again, playing football and hockey. In March, he celebrated his 10th birthday.

As the busiest and the only free-standing verified Level I pediatric trauma center in the region, Children’s Minnesota provides care for children of all ages with injuries ranging from fractures and concussions to life-threatening head and abdominal injuries in a way no other trauma center can. From the moment an injured child is met in the Emergency Department, the trauma team works together to provide the best possible care to promote healing and recovery. Children’s Minnesota’s Minneapolis campus has been verified as a Level I pediatric trauma center by the American College of Surgeons since 2013; since then, trauma-related admissions have increase by more than 40%. By having an attending pediatric surgeon and trauma-trained advanced practice providers in house 24/7 and an array of pediatric surgical and medical specialists and nurses immediately available, Children’s Minnesota is able to provide timely care to injured children.