During May we celebrate “Better Speech and Hearing Month” but for one Children’s Minnesota patient family, better speech is a 365 day a year celebration.

Shelly Ready recalls a day when she was playing with her son Ethen in the living room right after his 1st birthday. She had thrown a ball across the room saying “go get the ball and put it in the basket” and Ethen shocked her by following a two-step direction, following the ball without her pointing at it. “I always remember Ethen being super smart. He hit all of his milestones early.” 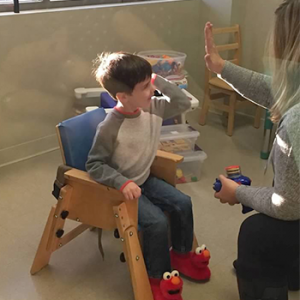 The one milestone Ethen seemed to be missing was imitating sounds. Although very vocal, Shelly said he kept “babbling” and couldn’t mimic the noises she read to him from their favorite farm animal book. After voicing concerns to Ethen’s daycare provider, they mutually agreed that something wasn’t quite right. Just weeks later, an in-home early childhood assessment confirmed Ethen had signs of a speech delay, although a formal diagnosis wasn’t made. Shelly was referred to Children’s Minnesota by Ethen’s pediatrician to meet with a speech-language pathologist where she was given clear direction and a plan.

“The first time I heard the word apraxia I Googled it and was scared out of my mind. No one would formally diagnose him with apraxia until he was 3 because so much can change around development. The one thing I loved about the therapists at Children’s was even though they wouldn’t formally diagnose him, they talked to me like a mom and told me how they were going to help Ethen and what the plan was,” said Shelly.

Ethen’s first speech-language pathologist at Children’s made drastic strides with Ethen using PROMPT (PROMPTs for Restructuring Oral Muscular Phonetic Targets), a technique that uses touch cues to manually guide patients through a targeted word or phrase. After switching to a clinic location closer to home, Ethen began working with Sheila, a speech-language pathologist, who helped prepare Ethen for Kindergarten.

“I cannot say enough good things about how the Children’s Minnesota staff took care of us – from the front desk to the therapists. They did not treat him like a patient, they treated him like their own child,” said Shelly. “He had so much fun, he thought his therapy was playtime. He even referred to the clinic as Sheila’s house.” Ethen’s therapy was hidden in activities like games and books and Shelly recalled that when Ethen mentioned his love for Star Wars in a session Sheila made note of it and brought a Star Wars book to their next session for she and Ethen to read from. 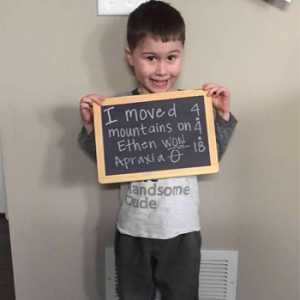 “Initially I was super scared Ethen wouldn’t live a normal life, I didn’t think it was a reality. Today he is in a special reading group to read with older kids. I wouldn’t have believed it even a year ago. My outlook has completely changed. Ethen is the most calm, caring and resilient little kid and it was remarkable to watch him in therapy each week. I really feel like his first year of school was a success from not only the therapy he received but the life skills he also acquired over years of therapy…. the patience, the hard work and overcoming obstacles and meeting goals. Priceless.”

Inspired by Ethen, Shelly has become a volunteer outreach coordinator with Apraxia Kids, a resource for families and patients diagnosed with apraxia. “My goal is to help raise awareness and get families connected to the care they need. I don’t want families to go through the fear I went through.”

Thank you to all of Children’s Minnesota speech-language pathologists and team who help patients and their families celebrate better speech and hearing every day.