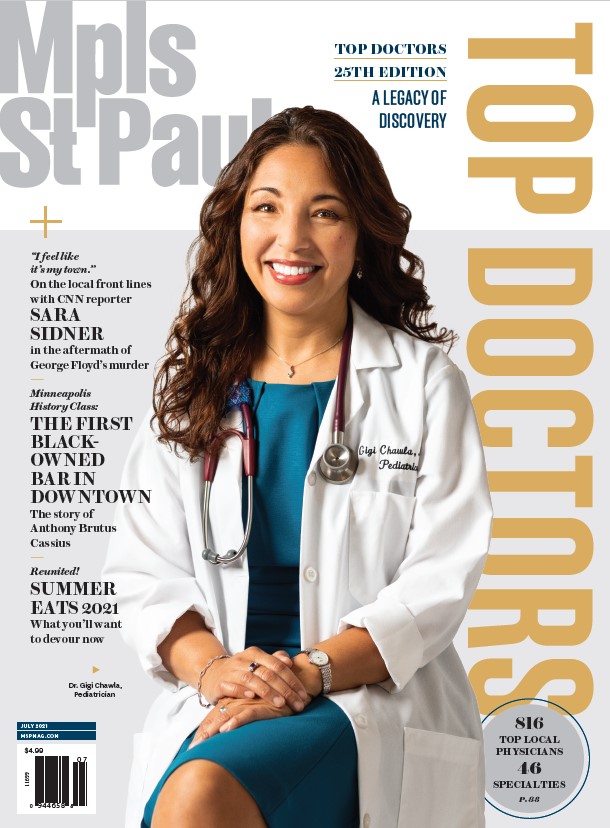 Children’s Minnesota is honored to have our Vice President, Chief of General Pediatrics, Dr. Gigi Chawla, featured on the cover of the Mpls.St.Paul Magazine 2021 Top Doctors issue, along with a feature story about her career. This is the second time for Dr. Chawla to receive this honor. In the feature story, Dr. Chawla talks about the changes to pediatrics in her 20 years of practice.

Among the changes Dr. Chawla has witnessed during her years as a pediatrician, one of them has been the enhancement of childhood vaccines that has helped curb the spread of serious illnesses, such as the rotavirus. In the interview, Dr. Chawla recalled hospitals full of kids coming in for the severe gastroenteritis, caused by rotavirus. Now, thanks to a routine childhood vaccine, approved in 2006 and 2008, kids are less affected by this illness and less likely to be hospitalized.

Dr. Chawla also discussed the potential the new COVID-19 vaccine technology has on other vaccines that could be developed. One specific exciting example: she predicts that the mRNA technology could be used to develop a vaccine for respiratory syncytial virus (RSV), a common respiratory virus that can be particularly severe in infants.

But Dr. Chawla stressed that these scientific enhancements often benefit communities in an inequitable way.

“With every scientific breakthrough, we have to think about how we apply those breakthroughs. This piece has to be elevated,” she said to the magazine.

Among her key priorities, Dr. Chawla is charged with understanding disparities in immunization rates between patients of color and white patients. Completion of early childhood vaccines, for example, have a 40% gap between Black and white patients.

“[This] has likely been present during my entire career and we’ve just never been brave enough to look at it or willing as clinicians to understand what our role is in mitigating it.”

The importance of early childhood

Dr. Chawla also talked about the evolution of understanding just how important our early years are.

“There are 700 neural connections being made every second [during the first few years of life]. It’s immense,” she said to the magazine.

As Reach Out and Read Minnesota’s Medical Director, Dr. Chawla aims to promote reading in the early years which is scientifically proven to decrease educational and opportunity gaps.