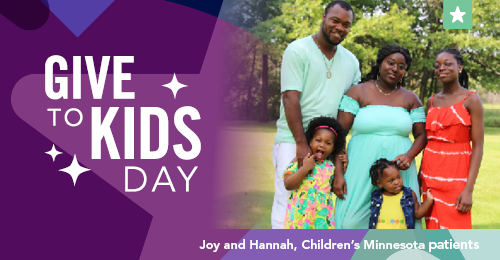 Christy Caez Claudio’s two children have their own unique personalities. Her son, Ezekiel, loves Pokémon and Manga, while her daughter, Ariana, is always creating, drawing and painting. Together, the family enjoys spending time at the parks near their Minneapolis neighborhood. Christy likes that there are so many parks in the city. But, in the summer of 2020, the events in their neighborhood had a big impact on her children’s mental health.

The family lives only a few blocks from where George Floyd was killed during an encounter with police. Floyd’s death sparked weeks of protests, some of which turned violent. Neighborhood stores the family had relied on were destroyed, including the pharmacy where the family’s medications were filled.

The civil unrest also took a toll on her children. They could not tell the difference between the fireworks going off and gunshots. Ezekiel and Ariana started having increased feelings of anxiety.

Christy and her kids found help from their care team at the Behavioral Health program at Children’s Minnesota. Ezekiel and Ariana’s mental health providers gave them strategies to work through the anxiety they were feeling and taught them how to not be scared.

“My son was worried something could happen to our family in their home. But, now they have both learned ways to not be as scared,” said Christy.

The care team has helped Ezekiel and Ariana work through other health issues. Ariana had been experiencing insomnia, so her psychologist worked with her on strategies to calm down, and she is sleeping much better now. Ezekiel has attention deficit hyperactivity disorder (ADHD) and had been getting into trouble at school. His psychologist worked with him on how to better control his emotions and remain calm. This in turn has increased his confidence and ability to try new things.

“It’s very helpful. His behavior in school has been much better,” said Christy. “He’s learned how to talk about his emotions.”

More than a hospital

Ezekiel and Ariana have been coming to Children’s Minnesota for primary and specialty care for a few years.

“It’s not just a hospital for them,” said Christy. She explained that both of her kids love Star Studio, the in-house TV channel at Children’s Minnesota.

When Ezekiel had to stay at the hospital for two days, the Geek Squad team in the hospital gave him video games to play. “When it was time to go home he asked ‘Why.’ He wanted to stay longer to keep playing the games,” said Christy. For Christy’s family, Children’s Minnesota is so much more than a hospital. It is a part of her community, and a partner for keeping her children healthy.