The eye infection conjunctivitis (kun-junk-tih-VY-tus) — often called pinkeye — is common in young kids. It's usually contagious, and breakouts can sweep through preschools and playgrounds. But even teens and adults can get pinkeye.

Pinkeye is an inflammation of the conjunctiva, the white part of the eye and the inner eyelids. It's a minor infection and although it might look bad, usually isn't serious.

Still, if your child shows signs of pinkeye, it's important to see a doctor. Some kinds of pinkeye go away on their own, but others need treatment. 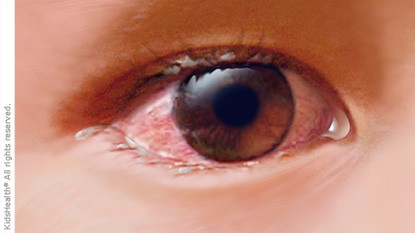 Infectious pinkeye (the kind that can spread to others) can be caused by many of the bacteria and viruses responsible for colds and other infections — including ear infections, sinus infections, and sore throats. Sometimes it's caused by the same types of bacteria that cause chlamydia and gonorrhea, two sexually transmitted diseases (STDs).

Some kinds of pinkeye are noninfectious, such as:

Newborns are at risk for pinkeye and can develop serious health complications if it's not treated. If a pregnant woman has an STD, during delivery the bacteria or virus can pass from the birth canal into the baby's eyes, causing pinkeye. To prevent this, doctors give antibiotic ointment or eye drops to all babies immediately after birth. Occasionally, this treatment causes a mild chemical conjunctivitis, which usually clears up on its own. Doctors also can screen pregnant women for STDs and treat them during pregnancy to prevent spreading the infection to the baby.

What Are the Signs and Symptoms of Pinkeye?

Besides the telltale red or pink color that gives pinkeye its name, eye discomfort is a common symptom. Kids might say that it feels like there's sand in the eye. Often, there's some discharge from the eye, and pain and swelling of the conjunctiva. Some kids have swollen eyelids or sensitivity to bright light. Pinkeye can affect one or both eyes.

In cases of allergic conjunctivitis, itchiness and watery eyes are common symptoms.

Pinkeye is contagious if it's caused by bacteria or a virus:

How Is Pinkeye Diagnosed?

If you think your child has pinkeye, it's important to see your health care provider to learn what's causing it and how to treat it. Other serious eye conditions can have similar symptoms, so a child who complains of severe pain, changes in eyesight, swelling around the eyes, or sensitivity to light should be examined.

If you can't get an in-person visit, you might be able to do a "video visit" instead. Telemedicine — when patients and health care providers use technology for the remote diagnosis and treatment of some health conditions — is becoming more and more popular. Ask your health care provider if his or her practice participates in telemedicine, and check with your insurance provider to see if this option is covered.

How Is Pinkeye Treated?

It can be hard to get kids to tolerate eye drops several times a day. If you're having trouble, put the drops on the inner corner of your child's closed eye — when your child opens the eye, the medicine will flow into it. If you still have trouble with drops, ask the doctor about antibiotic ointment, which can be placed in a thin layer where the eyelids meet, and will melt and enter the eye.

If your child has allergic conjunctivitis, your doctor may prescribe anti-allergy medicine, either as pills, liquid, or eye drops.

You also can give acetaminophen or ibuprofen to relieve discomfort (check instructions for correct amount).

How Can I Help My Child Feel Better?

Using cool or warm compresses on the eyes may make your child more comfortable. Clean the edges of the infected eye carefully with warm water and gauze or cotton balls. This can also remove the crusts of dried discharge that make the eyelids stick together in the morning.

Doctors usually recommend keeping kids with contagious conjunctivitis out of school, childcare, or summer camp for a short time.

Can Pinkeye Be Prevented?

Infectious conjunctivitis is highly contagious, so teach kids to wash their hands well and often with warm water and soap. They also should not share eye drops, tissues, eye makeup, washcloths, towels, or pillowcases.

Be sure to wash your own hands well after touching an infected child's eyes, and throw away items like gauze or cotton balls after they've been used. Wash towels and other linens that the child has used in hot water separately from the rest of the family's laundry to avoid contamination.

If you know your child is prone to allergic conjunctivitis, keep windows and doors closed on days when the pollen is heavy, and dust and vacuum often to limit allergy triggers. Irritant conjunctivitis can only be prevented by avoiding the irritating causes.

Screening and treating pregnant women for STDs can prevent many cases of pinkeye in newborns. A pregnant woman may have bacteria in her birth canal even if she shows no symptoms, which is why prenatal screening is important.

When Should I Call the Doctor?

If the pinkeye does not improve after 2 to 3 days of treatment, or after a week if untreated, call your doctor.

If your child has increased swelling, redness, and tenderness in the eyelids and around the eye, along with a fever, call your doctor. Those symptoms may mean the infection has started to spread beyond the conjunctiva and will need further treatment.