Jennifer was all ready for a Babymoon in Hawaii. She’d arranged it with work, purchased her flight and worked out all the details. At just 23 weeks, she felt certain she had plenty of time after returning to arrange everything for her highly anticipated new family member. No clothes or toys had been purchased and the nursery was still just an empty room. 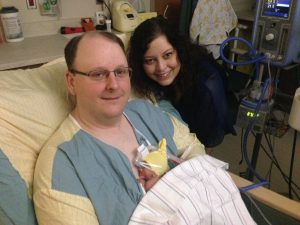 While at home, she felt something wet and immediately called her clinic and then her husband, Ryan. She got an appointment that day and the pair headed in, not sure what to expect. After checking the fetal heart beat and running other tests, the clinic assured her everything was okay.

Then, her 24-week appointment brought a new surprise. The doctor informed her that her amniotic fluid was low, and referred her immediately to the Mother Baby Center – a partnership between Allina Health and Children’s which is connected to the Children’s Minnesota Neonatal Intensive Care Unit (NICU).

“So, we’re not going to Hawaii?” Jennifer hadn’t expected this and didn’t know how to react. Her trip was two days later but instead of heading for the beach, she found herself on the way to the hospital.

After being monitored closely, she soon learned that the initial leakage had been her water breaking, which is not always easy to diagnose, and that she’d beaten the odds since she’d gone more than 10 days without giving birth.

The staff prepared Jennifer for the possibility that she might be at the hospital for 10 more weeks, which was hard for her to wrap her mind around. Jennifer was uncertain about her baby’s future and what was to come. To help cope with her anxiety, she attended a support group for inpatient moms.

A few days after being admitted to the hospital, her temperature spiked and after more tests, the doctor recommended inducing labor.

Delivery passed quickly and Sydney came into the world at just 25 weeks in April 2016. Jennifer can still recall the calming and soothing voice of one of the neonatologists on the team, Dr. Thomas Pokora – something she sorely needed when she could barely see her baby from all the tubes attached. Sydney, who weighed only one pound and 12 ounces, needed to be fed through an IV and she breathed with the assistance of a machine. Because of all the equipment attached to her, it took two nurses to move her.

With so many possible risks of being born prematurely, the Children’s Minnesota St. Paul NICU staff monitored Sydney closely. Feedings were increased slowly and once Sydney learned to maintain her own body temperature, she was moved to a crib instead of an isolette. Jennifer and Ryan learned to kangaroo their baby, holding her closely skin-to-skin.

“There are a lot of special nurses in our hearts,” Jennifer said. “I can’t speak enough about what our nurses meant to us. The NICU is a very intimidating place and as new parents it is beyond overwhelming. They helped guide us and support us in the process by getting us involved in the care right away. This helped us to be more comfortable and give us the confidence that we can care for this small baby by the time we go home.” 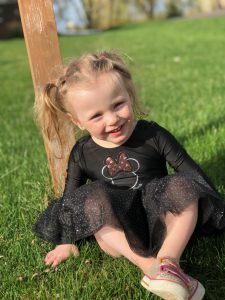 “When people wanted to do something for us, we’d ask them to donate to Children’s Minnesota or its Ronald McDonald Family Room,” she said. “Being at the hospital for so long was a good way to see where the money goes.”

The family was exposed to the myriad of services and specialties offered by Children’s and benefited from the presence of social workers, dieticians, physical therapists, occupational therapists and lactation consultants, to name a few.

By the time Sydney finally came home 91 days later, she was the size of an average newborn. Sydney has since gone to the Children’s NICU follow up clinic, and has been meeting all benchmarks. In Spring 2019, she celebrated her third birthday. Her parents describe her as feisty, curious and smart, always managing to surprise them with her quick wit and energy.