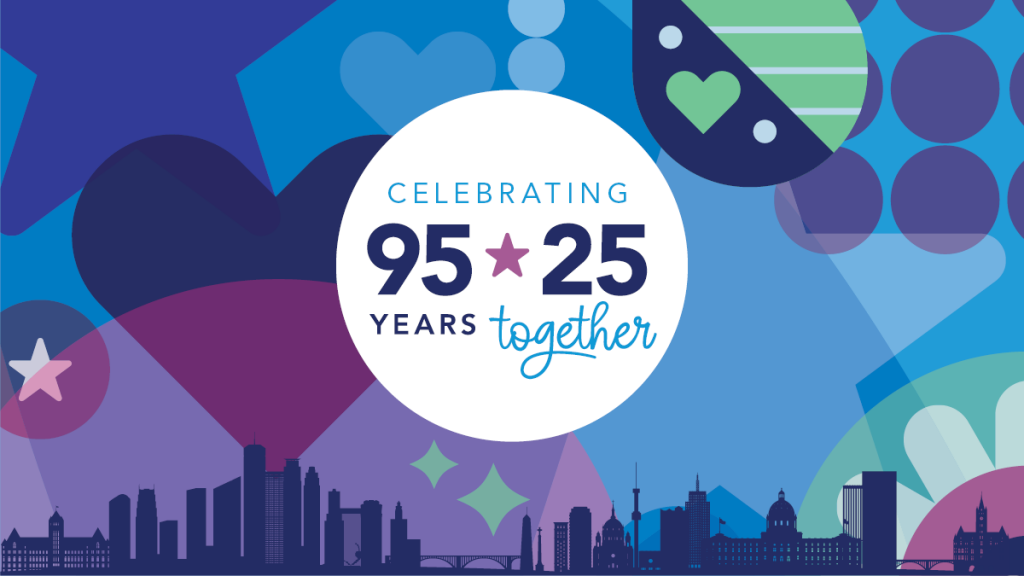 Thank you for joining us for some outdoor fun!

Children’s Minnesota hosted a community event to celebrate “95 years/25 together” to mark our 95th year of service to patients and families in the Twin Cities community and our 25th anniversary of bringing together the Minneapolis and St. Paul pediatric hospitals to form Children’s Minnesota on Wednesday Sept. 18.

The public event was held at The Commons park on the Great Lawn in downtown Minneapolis. There was free popcorn, games, face painting and more.  We watched the animated movie Incredibles 2.

We want to thank Mayor Jacob Frey for speaking at the event and honoring the service Children’s brings to our community. The Minnesota Vikings SKOL line brought their percussive talents to open the festivities. We also want to thank our music therapists who sang and Dr. Marc Gorelick, president and chief executive officer of Children’s Minnesota who helped to mark the occasion.

In 1924, the visionaries who founded the Children’s Hospital of St. Paul already knew that children were special. They knew that kids weren’t just smaller versions of adults. They recognized that health care needed to be tailored to kids’ needs. Now, almost 100 years later, we agree: Kids aren’t smaller versions of ourselves. They’re bigger versions of ourselves: brave, resilient, optimistic and inspiring. In fact, they’re the most the most amazing people on earth.

Take a minute to learn about part of the history of Children’s Minnesota below. Find our full timeline of events here.

1924: A hospital just for children
Walter Reeve Ramsey, MD, raises money to open Children’s Hospital of St. Paul. The first hospital, on the corner of Smith Avenue and Walnut Street in St. Paul, opens in 1924 and begins operating with 16 beds.

In 1967, Arnold Anderson, MD, is named medical director and chief executive officer of the Minneapolis children’s hospital even before it is built. In 1969, ground is finally broken on Chicago Avenue.

In 1979, Children’s – St. Paul also moves into a new building, on its current site on Smith Avenue.

In 2007, Children’s embarks on a $300 million renovation and expansion, the largest in its history, to provide all private patient rooms and upgrades to our facilities and clinical areas.

In 2013, Children’s Minnesota becomes the only Level I pediatric trauma center, thanks to a $17.5 million gift from UnitedHealthcare. Also in 2013, The Mother Baby Center opens as a new four-story, 96,000-square-foot, state-of-the-art facility that is a joint venture between Children’s Minnesota and Allina Health’s Abbott Northwestern Hospital.

Today, our organization is known as Children’s Minnesota. We are the seventh-largest freestanding children’s health care organization in the U.S. An independent, not-for-profit health care system, Children’s provides care through more than: 14,000 inpatient visits, 96,000 emergency room visits, 265,000 primary and 90,000 specialty care visits every year. Children’s is regularly ranked as one of the top pediatric hospitals in the nation by U.S. News & World Report.