Children's Minnesota in the News

Today, the Minnesota Wild, with the help of team mascot Nordy, presented Children’s Minnesota with a check for more than $30,000 from forward Ryan Hartman. Hartman’s generous gesture follows a fine from the NHL 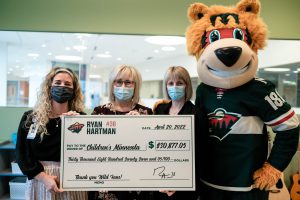 for Unsportsmanlike Conduct during an on-ice dust-up in a game against the Edmonton Oilers on April 12. Hartman told fans he’d cover the cost of his fine, and give the fans’ donations to Children’s Minnesota. Fans donated a total of $26,637.05 to Hartman via his Venmo account in less than three days. Hartman donated $4,250 of his own money (the amount of the NHL fine), and fans also donated an additional $9,000 directly to Children’s Minnesota.

Since the news of Hartman’s fine and viral fundraiser broke the week of April 12, 2022, it spread like wildfire throughout the media and online. At last check on April 20, nearly 200 media outlets nationwide have covered this story – from New York to Hawaii and of course, Minnesota – and it has generated more than 1.17 billion potential impressions online and counting.