Soraya suddenly developed the oddest rash. It looked like a bunch of tiny targets on her lower legs. She'd heard that Lyme disease can cause a target-shaped rash, so she and her mom made an appointment to see the doctor. The doctor explained that Soraya didn't have Lyme disease, but she did have a condition called erythema multiforme.

What Is Erythema Multiforme?

Erythema multiforme (pronounced: air-uh-THEE-muh mul-tuh-FOR-me) is a rash that forms in reaction to an infection. Sometimes, a person may also get the rash after taking medicine. In more severe cases (called erythema multiforme major), it can affect the lips and the inside of the mouth.

Erythema multiforme usually starts off looking like pink or red blotches. The blotches develop over a few days into round target (often called "bulls-eye") shapes with red, pink, and pale rings. The target shapes sometimes have blisters or scabs in the middle. The rash itches a lot and might even burn.

An erythema multiforme rash usually appears on both sides of the body, often on a person's arms, hands, legs, and feet. Some people also get it on the face, neck, and torso — and sometimes the lips and inside the mouth. As the rash goes away (which usually takes a couple of weeks), it may turn a brownish color. 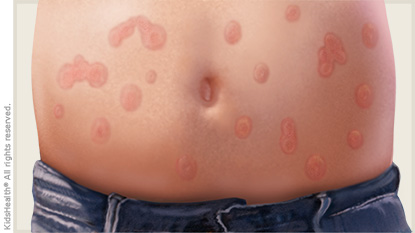 The rash may appear on its own, though some people also may have these problems:

Doctors think most cases of erythema multiforme happen when an infection causes the body's immune system to damage the skin cells. Erythema multiforme is often linked to the herpes simplex virus (the virus that causes cold sores). But bacteria, fungi, and other viruses also can cause someone to develop the condition.

A few people may get the rash after taking certain medications, such as seizure medicines, anesthesia medicines, nonsteroidal anti-inflammatory medicines (e.g., ibuprofen), antibacterial medications, and penicillin or other antibiotics. If you take any of these medicines and notice what looks like an erythema multiforme rash starting, call your doctor but don't stop taking your medicine unless the doctor suggests it.

Sometimes a person can develop erythema multiforme after getting an immunization, such as the tetanus-diphtheria-acellular pertussis (Tdap) or hepatitis B vaccines. Occasionally, doctors won't know what caused the rash to develop, but still can help someone heal.

Erythema multiforme is not contagious. So if you do have it, you won't give it to someone else. If someone you know has it, it can't be passed to you.

What Should You Do?

Call your doctor if you get a bulls-eye (target-shaped) rash of any kind. Doctors can usually recognize erythema multiforme just by looking at the rash.

To help figure out why you got the rash, your doctor will ask questions — like whether you've had any recent infections or what medications you're taking.

Erythema multiforme eventually goes away on its own. In most cases, though, a doctor will try to treat whatever caused you to have the reaction. If it looks like an infection triggered the reaction, a doctor may recommend an antibiotic medicine. If it's thought that a medication caused it, your doctor will probably tell you to stop taking it.

To help you feel better, the doctor may recommend:

These things can provide relief from pain or itchiness, but they won't make the rash go away any faster. In severe cases, (erythema multiforme major), a person needs to be hospitalized and may need IV (intravenous) medicine such as antibiotics or steroids.

How Long Does It Last?

Most people who get erythema multiforme have no long-term problems. The rash usually goes away in 1 to 2 weeks, but it can last as long as 4 weeks. Erythema multiforme doesn't leave scars, but some people might notice dark spots that last for several months after the rash goes away.

Erythema multiforme may come back again (recur), especially if you get re-exposed to whatever caused it in the first place. In cases where the herpes simplex virus is thought to be causing the rash to return, doctors might prescribe a daily antiviral medicine./p>