Clubfoot is a common type of birth defect that affects muscles and bones in the feet. Instead of being straight, a clubfoot points down and turns in. This twisting causes the toes to point toward the opposite leg. A baby can be born with the defect in one or both feet. 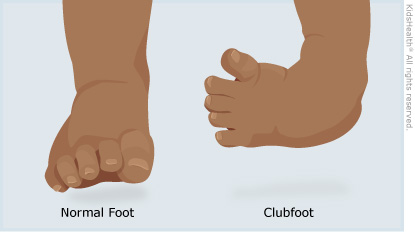 A clubfoot isn't painful and won't cause health problems until a child begins to stand and walk. But clubfoot that isn't treated can lead to serious problems — and even make a child unable to walk. So it's very important to begin to correct it quickly, ideally a week or two after birth.

Doctors often don't know what causes a baby's clubfoot. It's more common in boys, and can run in families. A baby with clubfoot usually has no other medical problems.

Clubfoot usually is found on an ultrasound around the 20th week of pregnancy. If not, it's diagnosed when a baby is born.

How Is Clubfoot Treated?

Clubfoot won't get better on its own. It used to be fixed with surgery. But now, doctors use a series of casts, gentle movements and stretches of the foot, and a brace to slowly move the foot into the right position— this is called the Ponseti method.

A baby with clubfoot will be treated by an orthopedic surgeon (a doctor who focuses on conditions of the bones, muscles, and joints) who has been trained in the Ponseti method. If your baby has a clubfoot, make sure that your orthopedic surgeon has had this training.

The Ponseti method is done in two phases: the casting phase and the bracing phase.

A child will wear the brace all the time for about 3 months, and then only at night or during naps for a few years. Most kids adapt well to wearing the brace, though it can take them a day or two to get used to it.

Permanently fixing a clubfoot can take several years. But a clubfoot that isn't corrected can cause physical and emotional problems.

By following the orthopedic surgeon's treatment plan, you can help make sure that your child will be able to walk, run, and play without pain. Consider yourself a partner in your child's care.

And remember — the orthopedic team has heard it all. If you have questions or concerns, they can offer you helpful advice or talk about the many Ponseti method successes they've seen.