What is a genetic condition?

Our bodies are made up of billions of cells. Inside each cell is a set of genes. Genes are the body's "instructions." Our bodies read the genes and use the instructions to make the proteins that compose who we are. For example, there are genes for things like eye color and height.

Genes are inherited (passed on to you by your parents). That is why you look similar to your parent 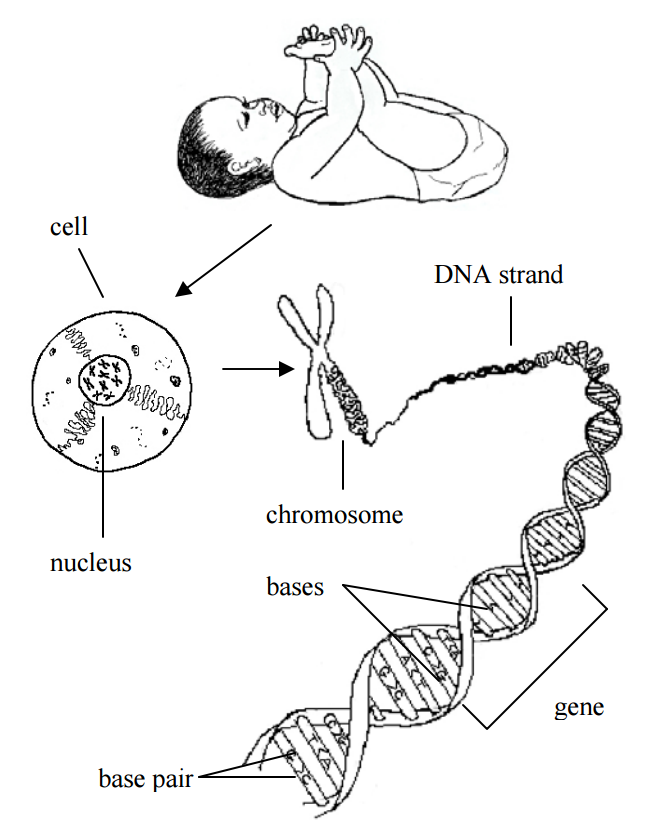 Bases: nucleic acids or chemicals in DNA. The names of the chemicals are adenine (A), cytosine (C), guanine (G), and thymine (T).

Cells: building blocks of the body.

Chromosomes: packages of long strands of DNA. Chromosomes are found in pairs in the cell's nucleus. Humans have 23 pairs of chromosomes.

DNA (deoxyribonucleic acid): spiral- shaped strands of chemicals that make up a chromosome.

Genes: section of the DNA strand. One gene is a string of many bases.

Nucleus: the part of the cell that contains the DNA.

How are genes passed on from our parents?

Do genetic conditions always come from a parent?

Not always. Genetic conditions are caused by a change in a gene or genes. Sometimes that change is inherited from a parent. Sometimes, a mutation (change) can happen in a gene. New mutations happen all the time in our bodies. Often these changes are minor and don't cause a problem because:

If a serious change happens to a gene in a sperm cell (father's sex cell) or egg cell (mother's sex cell), it can be passed on to a child. When that happens, the parent does not have the genetic condition but the child does.

Nothing can be done to cause or to prevent a change in a gene. Usually there is no way for parents to know that a change has happened until their child begins to have symptoms of a condition.

Is there a test for gene changes?

This sheet is not specific to your child, but provides general information. If you have any questions, please call your clinic.