What is intraventricular hemorrhage (IVH)?

The ventricles (ven-trih-kuhls) are spaces in the brain that contain cerebrospinal fluid. Intraventricular hemorrhage (in-trah-ven-trik-yu-lar hem-or-age) is bleeding in or near the ventricles. It is sometimes called a "bleed".

A preterm baby's brain has many tiny, fragile blood vessels. After birth, the premature baby's brain is exposed to changes in blood flow and oxygen levels. This may cause the blood vessels to break and bleeding to occur. It happens mostly in babies who are extremely premature or who have medical problems during or after birth.

What are the signs of IVH?

Many babies do not have any symptoms at the time the bleeding occurs. Some babies do have symptoms such as:

How is IVH diagnosed?

Babies at risk for IVH will have an ultrasound of the head to check for bleeding in the first days after birth. This test is done at the baby's bedside and uses sound waves to give a picture of the baby's brain. The picture will show the size of the ventricles and any areas of bleeding in the brain tissue.

IVH is graded on a scale of one to four, with grade IV being most severe. See pictures below.

What happens to babies who have an IVH?

As many as 30% of babies born weighing less than 1,000 grams (about 2 pounds, 4 ounces) have intraventricular hemorrhages. Most of these bleeds are mild (Grade I or II), and about 90% resolve with few or no problems. In mild cases, the body absorbs the blood. Usually the follow-up head ultrasound is normal. The baby's development is most often typical for a preterm baby.

How will I know if my baby will have long-term problems?

This can only be determined over time by monitoring the baby's development. For this reason, it is important to have your babyâ€™s progress followed after discharge from the hospital. 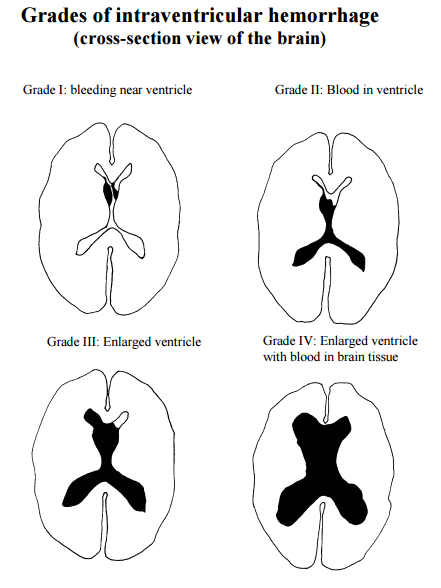 This sheet is not specific to your child but provides general information. If you have any questions, please ask the doctor.