A Boy and A Birthmark: Evan's Story

I'm Evan Ducker. I'm just like every other 15-year-old kid, except I was born with a red birthmark called a port wine stain. Doctors don't know the exact cause of birthmarks like mine — but they do know port wine stains occur in about 3 of every 1,000 children all over the world.

Some birthmarks are signs of serious medical conditions. I'm very fortunate — mine isn't. I pretty much live a regular life, except for people asking me about it all the time, which can get annoying sometimes. I do have to undergo laser surgeries to prevent my birthmark from causing more serious health problems when I get older.

But, overall, my mark is just a spot on my skin. It's not contagious or harmful to other people. It's sort of like a freckle, only bigger.

Where Are the Books About Birthmarks?

When I was about 4½ years old, I asked my mom why there weren't any characters with birthmarks in the books she would read me. When we went to the library, we realized there weren't any available for little kids.

Worse than that, the books available to older kids and adults portrayed characters with birthmarks as being lonely outcasts — ashamed, unattractive, and unhappy. It seemed like people with birthmarks were being stereotyped and only portrayed to the public in a negative way. I didn't think that was right.

My mom knew I was disappointed. There weren't any books with cool characters who had birthmarks. So she said we could write our own. She took all my ideas and we created the first book of its kind to educate kids about birthmarks and also offer a more realistic, positive character with a birthmark.
I based the story on all real things that happened in my life. But instead of people, the characters in the book are real animals from the Galapagos Islands, including red-footed booby birds.

When people ask why I picked a booby bird as the main character, I tell them that I initially thought the name was silly, but later I learned the birds have red feet because of a vascular condition, similar to a human birthmark! That was pretty cool.

It was really tough to get my book published. It took a long time because a lot of publishers rejected it. They would tell my family there wasn't a big enough market for a book about birthmarks. But we knew the book wasn't about birthmarks. It was about tolerance for people's differences in general. We just picked a character with a birthmark because that's what I knew.

My mom never gave up trying to help make my dream come true. And in 2005, she finally took her own money and self-published "Buddy Booby's Birthmark." I decided to donate a portion of the book's profits to the Vascular Birthmarks Foundation, an organization that helps people with birthmarks all over the world.

The response to my book was pretty overwhelming. I started getting letters from doctors, teachers, parents, and adults and kids with birthmarks from all over the world. They all shared their stories and thanked me for sharing mine. Teachers read my book to students and then wrote to tell me what a difference it made in the way classmates treated each other. My book was helping kids to accept and appreciate their differences. That was really awesome!

As more teachers started reading my book, I was asked to create a global reading event for birthmark awareness. Along with support from my family and the Vascular Birthmarks Foundation, I created the "International Buddy Booby's Birthmark Read-Along for Tolerance and Awareness." It's a free annual global reading initiative in schools. Teachers can register online at my website.

Thousands Read Along Each Year

They promise to share my book with a class on May 15 and discuss how the message relates to students — whether they have a birthmark or not. The last 2 years, I received grant monies, corporate sponsors, and private donors, allowing me to also offer free copies of my book to the first 100 participants in the read-along.

To date, about 30,000 children representing 300 classrooms from schools in 12 countries have participated and learned about birthmarks and tolerance. I'm really proud of that! The most surprising thing to come from my book was learning how many people from other countries wanted it. I realized there were still a lot of myths and misconceptions about birthmarks in other cultures. And children worldwide were suffering from a lack of public education.

I get regular requests to translate my book into Spanish, German, Japanese, Chinese, and French. But that's really expensive and we would need a lot more help to take that challenge on. But I really hope that happens someday.

I've answered thousands of letters since my book came out. They've come from as far away as Australia, Malta, and Singapore, just to name a few. I've traveled to schools all over my home state of New York and traveled overseas to talk to kids about birthmarks and how they can create their own stories. I want them to take their ideas and make a difference in the world — no matter how young they are! I've met a lot of great e-buddies and had some unbelievable experiences because of my book.

In March 2009, I was invited by Dr. Rosemary Watson to be a guest of Our Lady's Children's Hospital in Ireland! I was flown to Dublin and spoke to more than a hundred families of children with birthmarks. It was the best trip of my life! While I was there, another family flew all the way from England just to meet me and thank me in person for creating "Buddy Booby's Birthmark." It amazes me how generous and supportive people have been of my cause to raise birthmark awareness worldwide. 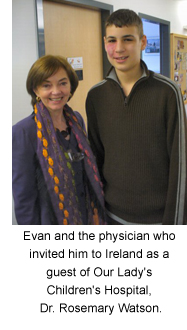 Since 2005, my book and my read-along have grown by word of mouth and brought me a lot of unbelievable opportunities and surprises. Because of my book, I've been on television (CNN, CBS, and NBC), had book signings in stores like Barnes & Noble and Borders, and spoken at medical conferences and schools. Sort of by accident, I’ve become a spokesperson for kids with birthmarks.

In June 2009 I was honored as one of the country's "Top Youth World-Changers" when I was named a national finalist in the "Do Something" Awards. In addition to winning a weekend in New York City and a photo shoot, I signed a contract with Doritos, and my picture and cause will be appearing on 44 million Doritos bags. My finalist posting is here.

The Jonas Brothers saw my video entry for the "Do Something" Awards and liked it so much that they featured it on their website. That was a shocker and pretty cool!

I was chosen to be featured in a movie called "Friends" and I was named a local winner in the Kohl's Kids Who Care Scholarship contest. The Vascular Birthmarks Foundation named my book's main character, Buddy, the red-footed booby bird, as their mascot.

My book really took on a life of its own. I'm just along for the ride at this point. And it's been a fun and wild one! Probably the one thing I'm asked the most when I'm out at schools is "How did you do it? And how can kids get their books published?"

Mostly I tell kids to never stop asking questions and never give up hope if they believe in their story. If you see something you don't think is fair or right, question it — like I did. Sometimes just a simple question can get people talking and stir up action. In my case, even though I was just a little kid I got my mom to realize there was a need for education. Sometimes the littlest voice can spread to make the boldest impact.

I'm proof that anyone can make a difference in the world, just by observing a need. Then, just try to think of the best way to fill that need. From there, with support from your family and friends anything is possible. Maybe not always easy but definitely possible.