What Are Knock Knees?

Knock knees — or genu valgum (GEE-noo VAL-gum) — is when a child stands up straight and the knees touch but the ankles are apart. Knock knees often happen as a normal part of growth and development. So, kids toddler to elementary school age often have knock knees. It's rarely serious and the condition usually goes away on its own by the time a child is 7 or 8 years old.

What Are the Signs & Symptoms of Knock Knees?

Parents usually notice the way their child’s legs look or that the knees touch. They might worry that their child will trip and fall. Kids might be bothered because their knees touch during walking, but knock knees don’t usually cause pain. 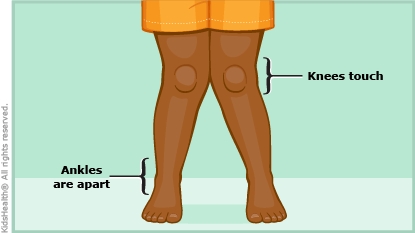 Normal bone growth and development when kids are about 2-4 years old can cause the knees to turn inward.

Rarely, knock knees that begin or worsen after age 4 can be caused by a health problem. For example:

Who Gets Knock Knees?

Most young kids’ knees turn in at least a little bit. It’s a normal part of development between ages 2–4 that usually gets better by about age 7–8. Some kids might have knock knees from a health problem. If so, the signs develop later, usually after age 6 and get worse instead of better.

How Are Knock Knees Diagnosed?

Health care providers do an exam and ask about the child's medical history. They probably won't do any tests if the child is 2–4 years old, feels well, and both legs tilt inward to the same degree. Instead, they'll watch to make sure the knock knees gets better as the child grows.

Some kids might need to see an orthopedic doctor (bone specialist) if:

Kids might get an X-ray to look for healed fractures or rickets. If rickets is suspected, blood tests can help make that diagnosis.

How Are Knock Knees Treated?

Most kids who have knock knees from normal growth and development don’t need treatment. It usually corrects itself as the child grows.

Severe knock knees or knock knees that are worse on one side sometimes do need treatment. In the past, kids with knock knees might wear braces and shoe inserts. They were found to not be helpful so are no longer used.

In rare cases where children have symptoms such as pain or trouble running, doctors might suggest surgery after age 10.

To treat knock knees from rickets, doctors usually recommend adding vitamin D and calcium to the child’s diet. Some kids with Rickets might need to see a specialist. Rickets due to a genetic condition may need more specialized treatment by an endocrinologist (a doctor who treats diseases of the endocrine system).

What Else Should I Know?

Kids with mild knock knees from normal development don't need to limit what they do. They can run, walk, and be as active as other kids. If your child is bothered by having knock knees, reassure them that it’s likely to get better on its own.